Inside the mummies' embalmed bodies – courtesy of a hospital CT scanner
The British Museum's next big exhibition reveals secrets that experts have been able only to guess at – until now. 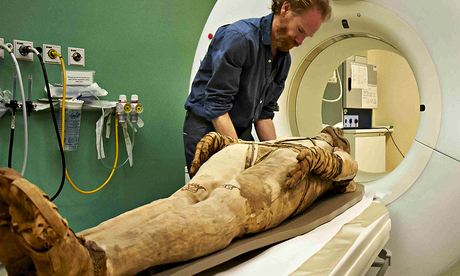 Spare a thought for the unknown adult mummified in a Theban necropolis more than 2,500 years go. Not only did he suffer the most excruciating, possibly life-threatening dental abscesses, but the embalmer botched the afterlife preparation, leaving bits of brain in his skull as well as a broken section of the spatula he was using to remove it.

Then there's Tamut, a temple singer with enough calcified plaque in her arteries to risk a heart attack or stroke.

Tamut and the unknown adult male are two of the British Museum's 120 Egyptian and Sudanese mummies. Experts now know far more about them because of new "electronic excavations" using the latest generation of medical CT scanners.

The museum on Wednesday revealed the fresh insights as it announced details of an interactive exhibition, Ancient lives, new discoveries, which will be £10 for adults and free for those particularly fascinated by brains being scooped out of skulls through the nose – the under 16s.

John Taylor, the museum's mummy curator, said the new techniques had allowed researchers to discover much more about life and death along the Nile more than 5,000 years ago.

The museum has not unwrapped a body in 200 years. "We don't want to disturb what is inside these bodies," said Taylor. "They are incredibly fragile, and they are also human beings who actually lived."

The museum has been x-raying mummies since the 1960s but, as the technology has improved, the results have dramatically improved.

The latest finds have been uncovered thanks to the newest CT scanners which are used in hospitals, allowing researchers to discover more about age, lifestyle, health and what the people actually looked like. "It allows us to take a journey beneath the wrappings, beneath the skin to see what is inside," said Taylor.

There will be eight mummies in the show. Details of two were revealed yesterday. The unknown Thebes man, mummified around 600BC, is particularly interesting because of the bits of tool that were left in the poor man's skull.

Daniel Antoine, who is responsible for the museum's human remains collection, said embalmers had "great skill and knowledge of human anatomy", managing to extract a brain through a hole no bigger than 2cm by 2cm.

In this case, something went wrong. The embalmer would probably have used a metal rod to break the bones at the top of the nose to then extract the brain with a wooden or perhaps reedy spatula – it is this that somehow broke and remains in the man's skull along with brain.

Antoine said they also found five dental abscesses which "would have caused significant discomfort and may have been a cause of death" because if the infection had got in to his bloodstream it could have caused septicaemia.

Tamut lived in Thebes around 900BC and had a top job as a temple singer, or chantress, of the god Amun. Because of her high status she was given the best possible mummification. Researchers have scanned and made 3D copies of amulets that adorned her body.

They have also detected a pair of small metal plates which cover the incision that the embalmer would have made in her left abdomen to drain out her internal organs. They have on them carvings of a protective eye, presumably to help heal the wound magically.

Tamut went in to the latest dual-energy CT scanner at the Royal Brompton hospital, which allowed researchers to make images of her blood vessels, so visitors will be able to see calcified plaque in her femur artery, for which people would take statins today.

The eight mummies in the show cover a period of 4,000 years, from 3,500BC to AD700. Taylor hopes even more secrets will be revealed in years to come, including being able to read hieroglyphic inscriptions on objects inside the mummies.

"It is not by any means the end of the road because the technology is moving on rapidly all the time, and we're hoping in the next few years we'll be able to continue scanning more mummies and revealing more remarkable facts."

• Ancient lives, new discoveries is at the British Museum 22 May-30 November, sponsored by Julius Baer

Re: Inside the mummies' embalmed bodies , Brits Museum