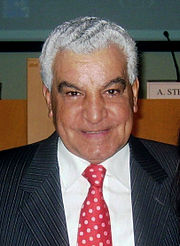 The world-famous archaeologist and TV personality will bring his U.S. lecture tour Wednesday to the Oklahoma City Museum of Art, where he will present his talk "The Pyramids, Mummies and Cleopatra: Recent Discoveries."

From the towering grandeur of the Sphinx to the golden glory of King Tut’s funerary mask, ancient Egypt continues to captivate the curious with its beautiful secrets.

And Zahi Hawass delights in shedding light on some of his homeland’s most fascinating secret places and treasures.

“You know, mummies have curses and pyramids have magic. ... These are things that people talk about,” Hawass said in a phone interview last week from Los Angeles, just one of the stops on his ongoing U.S. lecture tour. “Egypt is really in the hearts of everyone.”

The world-famous archaeologist and TV personality will bring his tour Wednesday to the Oklahoma City Museum of Art, where he will present his lecture “The Pyramids, Mummies and Cleopatra: Recent Discoveries.” His appearance, which also will include a signing for his latest book, “Discovering Tutankhamun,” is part of the museum’s James C. Meade Friends’ Lecture Series.

“Dr. Hawass is the leading figure in Egyptian archaeology, and his appearance at the museum will be an opportunity not to be missed,” E. Michael Whittington, museum president and CEO, said in a news release. “Ancient Egypt is the cradle of world civilization and continues to fascinate us today.”

As with most stops on Hawass’ tour, the Oklahoma City lecture is sold out, but it will be simulcast in the museum’s Founders’ Hall, said Ralph Cornelius, marketing and communications manager. People can attend the simulcast for free and purchase a copy of Hawass’ book from the Museum Store to have signed.

A regular on the History Channel, the Discovery Channel and PBS, Hawass has led excavations at most of the archaeological sites in Egypt during his storied career.

He rose to unprecedented career heights in Egypt, becoming secretary general of the Supreme Council of Antiquities, as well as the first minister of state for antiquities. But the February 2011 revolution that ousted President Hosni Mubarak also ended Hawass’ tenure as chief overseer of Egypt’s antiquities.

He is widely known for promoting the preservation of Egypt’s heritage — his heritage.

“We had 200 foreign expeditions working in Egypt, and before me, the stars were the foreigners. It had never been an Egyptian that was the star. But I did that because I worked very hard and I studied well and I got a good education,” he said.

He also is known for donning a wide-brimmed hat reminiscent of silver-screen archaeologist Indiana Jones and bringing a larger-than-life personality and energy to his work.

“If you have passion for anything, when you talk about it, what you talk (about) enters the hearts of people,” he said, adding he advises young men and women, “if you give your passion to anything, you make it big. And I gave my passion to archaeology.”

Hawass isn’t shy about pointing out that his U.S. lectures have drawn the kind of crowds often reserved for rock stars.

“In Philadelphia, the lecture was sold out in four days. Nine hundred seats, $25 a ticket. And a reception was sold out, and also 200 books I signed,” he said. “I am talking about three important things that capture the hearts of anyone all over the world, not only America.”

During his lecture, Hawass will share many important discoveries concerning pyramids, mummies and Cleopatra. He will reveal the mystery of the Sphinx discovered during drilling underneath the ancient statue and talk about his search for the tomb of Cleopatra and Mark Antony.

“The pyramids have magic and mystery. With pyramids, I make (a) major, important discovery. I sent a robot inside the Great Pyramid, and the robot found three doors. And we are looking to discover now what’s behind the three doors,” he said.

Advanced technology also helped his team identify the mummies of the mother, father and grandmother of King Tutankhamun.

“I found out through my studies, through CT scans and DNA (analysis), that King Tut was a disabled boy. He had a club foot and also he had malaria,” he said. “We are searching now for the mummy of Queen Nefertiti, because we found the mummy of her daughter that she married to King Tut.”

Since the 2011 revolution, Hawass’ lectures venture beyond ancient antiquity and into current events.

“I will talk about what’s happening in Egypt now, of the destruction of antiquities. ... There are illegal excavations happening at night, people search for gold and for treasure,” he said.

“What I hope now, since we’re having the election of a president this month, I hope that Egypt will be stable for antiquities.”