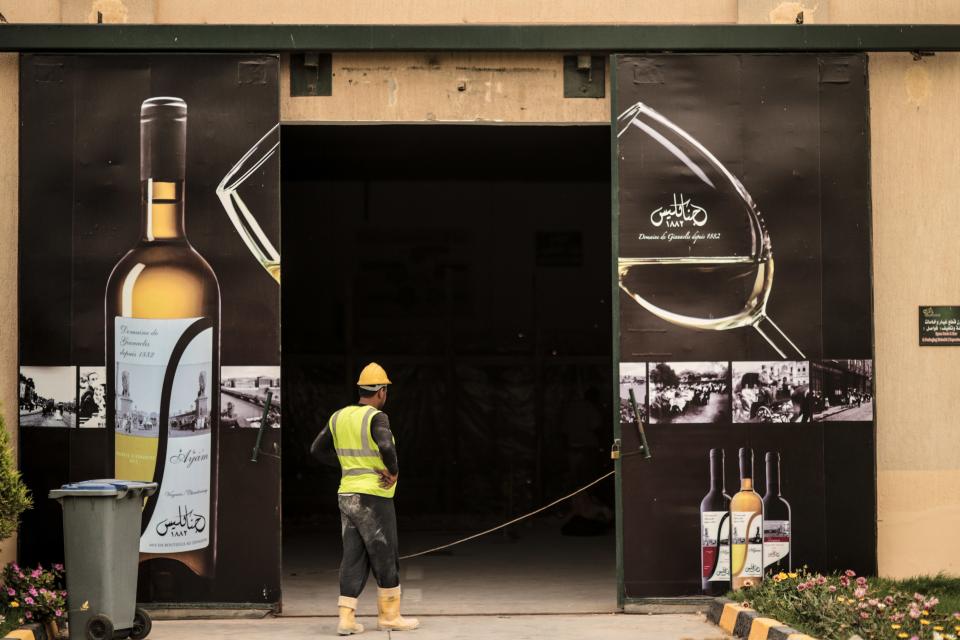 CAIRO (AP) — An organic wine producer is growing indigenous grapes near famed pharaonic tombs in central Egypt, vintners in the Nile Delta have modernized a long-neglected 19th century winery, and in Cairo's hotels, tourists can now enjoy Egyptian wine described by an expert as "eminently drinkable."

It's all part of a now 15-year effort to revive Egypt's small wine industry, which mainly caters to tourists. The country's two main winemakers benefit from a customs regime that keeps out virtually all imports, but they face the challenge of growing grapes in a searing desert climate and marketing their products in a conservative Muslim country.

Kouroum of the Nile, an organic winery based in the Red Sea resort of el-Gouna, has planted 120 acres of Bannati grapes, an indigenous variety used for its premium Beausoleil white wine, in central Egypt. The vineyard is an hour's drive north of Beni Hassan, the site of well-preserved 3,600-year-old pharaonic tombs.

Labib Kallas, the Lebanese manager of the winery, said the idea was to make an authentic local wine.

Kouroum has another, much larger vineyard in the Nile Delta north of Cairo, where it grows imported varieties of grapes for its Jardin du Nil line. Growers rely on irrigation and must strike a delicate balance, giving the plants just enough water to survive the desert heat but not so much that it dilutes the flavor of the grapes.

Given such conditions, Egypt is unlikely to emerge as a top wine producer anytime soon, or even challenge nearby Lebanon, Israel, Turkey or Greece. But Kallas says the winery has succeeded in making an authentic and enjoyable local product.

"Whether we like it or not, it's Egyptian wine," he said. "We were really surprised from the quality we've made, because our challenge from the beginning was just to produce a drinkable wine."

The Jardin du Nil wines have won a handful of medals at European wine competitions and were awarded a bronze medal by the Decanter wine magazine in 2012. Scottish wine writer Tom Cannavan gave Jardin du Nil a favorable review on his website that year.

"The chance to taste something new, from somewhere new, is always interesting. I'd happily enjoy a glass or two of these Egyptian wines in the future," he wrote.

Such praise would have been unheard of a decade ago, when most Egyptian wine was little more than a headache in a bottle.

In ancient times, Egypt was part of a winemaking tradition spanning the eastern Mediterranean. Tomb paintings show ancient Egyptians crushing grapes and pharaohs sipping wine from goblets. The builders of the pyramids at Giza were given a daily ration of low-alcohol beer — a more salubrious alternative to water from the Nile.

Winemaking fell out of fashion after the 7th century Muslim conquest, but enjoyed a brief revival in the late 19th and early 20th centuries, when Egypt was under British colonial rule and Cairo was a freewheeling, cosmopolitan city with sizable European, Jewish and Armenian communities.

In 1882, Greek entrepreneur Nestor Gianaclis founded a winery in the Delta with grapes nurtured by the annual Nile flood. But the winery was nationalized in the 1960s and fell into neglect.

The industry was privatized in the late 1990s, and within a few years Gianaclis was acquired by Al-Ahram Beverages Company, the country's leading producer of beer, wine and spirits, now owned by the Heineken Group.

The winery has since been rebuilt and modernized, and the company runs tours of the facility from Cairo. Gianaclis grows its own grapes elsewhere in the Delta, but its most popular premium wines are made with grapes imported from France, Lebanon and South Africa.

Manager Sebastien Boudry, who came to Egypt from his native France in the late 1990s, points to improvements such as French-made oak barrels used to age the winery's Chateau de Granville reds, made from imported French grapes. Humidity sensors and satellite technology have helped the winery to better calibrate the irrigation of its own grapes.

"We have improved from zero to almost 100," he said. "We can still always improve. Our vines are still young."

The years of unrest in Egypt following the 2011 uprising that toppled longtime President Hosni Mubarak had little impact on either winery, and Kallas said 2011 was actually a record year for Kouroum. "The year of the revolution people were staying at their places, watching TV and drinking alcohol," he said, chuckling.

In conservative Egypt, where Muslims make up 90 percent of the population of about 90 million people, it is virtually impossible to advertise alcoholic beverages outside major hotels. Kallas says more than 90 percent of his consumers are tourists.

Michael Karam, a regional wine expert who wrote a book on Lebanese wines, says Egypt has made progress in recent years. He is friends with Kallas, and tasted Kouroum's wines in 2012.

"In relative terms, what he's been able to do there is quite remarkable, in the sense that he's made wine that is eminently drinkable," he said of Kallas.

Egypt is still a decade or two behind Lebanon, which only burst onto the international scene in the last five years, Karam said.

"You can't sell a wine in isolation, you've got to sell a country," he said. "You've got to sell the idea of Egypt as a wine-making country, and that's going to be tricky because international consumers are just not that daring."

Re: Wine making in modern Egypt

Re: Wine making in modern Egypt