British Museum
One of the earliest examples of a prothesis.

You are walking down the street in Thebes, Egypt, 2,600 years ago, when a cart runs over your foot. The bad news is you lose a toe. The good news is Egyptian doctors have learned how to make you another one.

An artificial toe discovered in the dusty archives of the British Museum and put through a series of tests turns out to be one of the earliest examples of a prosthesis known anywhere in the world. The lifelike toe was made of cartonnage, a plaster-treated linen used for low-cost burials in ancient Egypt, and has a fleshlike color and leathery texture. Originally it came complete with a toenail that was probably made of a glassy substance.

The toe is thought to have been used in life before being buried with its owner. The joint between the artificial toe and the owner's foot would have been concealed by the strap of a Y-thong sandal, while holes around the edges suggest it was held in place by laces around the foot.

No one knows to whom the toe belonged, or where he - or she - was buried. Dolomite limestone and magnesia clay found on the toe indicate it was made in or near Thebes, close to the Valley of the Kings. The linen in the cartonnage was woven from a type of yarn found in Egypt no later than 600 B.C. The toe may be several centuries older than that, but its exact age is uncertain.

In later centuries, Egyptian prosthetics became more elaborate and commonplace. An artificial forearm, for example, can be found on a mummy in Arlington Museum, England, while a mummy in The Manchester Museum, England, boasts a synthetic penis and feet. 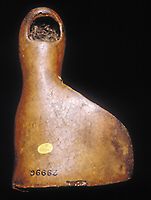