I was reading this article in the KMT journal by Dr Hawass and he mentioned that some think that the large "white queen" at Akhmin, usually identified as Queen Merytamen, is thought by some to be Queen Ankhesenamen on stylistic grounds.

Here's a photo of Meryetamun

Anyone know what stylistic grounds would make it likely to date from the time of Tutankhamen??? The statue looks like the spitting image of the statues of Queen Nefertari, Meryetamen's mother, as they appear on the facade of the Hathor temple at Abu Simbel. Same tri-partite wig, same earrings, same general shape of the body... Both images are meant to represent these women as an incarnation of the goddess Hathor I believe.
So why date it back to a previous reign?


There's another image attributed to Ankhesenamen that I find peculiar:

What's that on her head? It alsmost looks like the double crown to me. Did they reconstruct this crown on the wrong head? Should this be part of the King's attire?

Original place I found this photo is http://www.angelfire.com/art/ankhes/tutankhamen.html

I wondered about that myself when I read the article about Akhmim. The picture from your link is the very same statue in question, in the ruins of the Min temple at Akhmim:

Just about every image we have of Ankhesenamun is typical stuff from the Amarna Period; Tut's reign was, after all, more or less an extension of that period as far as art is concerned. Here's one of Ankhesenamun from the small shrine found in Tut's tomb: 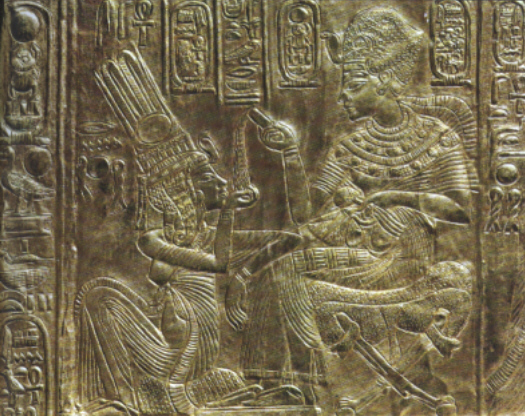 The style of crown is basically the same, as is the elaborately pleated gown, the latter especially a common style of formal dress among New Kingdom women.

What I do notice--and this is quite subtle--is a slight swelling of the belly on the Akhmim statue as well as a touch of flaring to the hips, both typical of the Amarna Period. It is especially evident in the KMT article in the photos on pages 18 and 19.

Or it could be that on the bottom of the statue base is a little label that says "Made in Akhetaten.

I had wondered if the "slight swelling of the belly on the Akhmim statue as well as a touch of flaring to the hips" was what people were going after. But it seems to me that the statues known to belong to Nefertari also display that. The statue on the facade of the Hathor temple is a very good example of that. Similarly the statues on the Abu Simbel temple seem to display these characteristics.