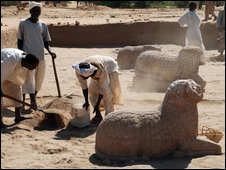 Three ancient statues, engraved with a little-understood sub-Saharan language, have been unearthed in Sudan.

The ram statues symbolise the god Amun, and include the first discovery of a complete royal dedication in Meroitic script, only found before in fragments.

It is the oldest written sub-Saharan language and dates from the Meroe period of 300BC to AD450.

Archaeologist Vincent Rondot said it was "an important discovery", but the inscriptions were hard to interpret.

The statues were discovered three weeks ago at el-Hassa, a site close to Sudan's 50-odd Meroe pyramids, about 200 km (120 miles) north of the capital Khartoum.

Mr Rondot said: "It is one of the last antique languages that we still don't understand.

"We can read it. We have no problem pronouncing the letters. But we can't understand it, apart from a few long words and the names of people."

"It is absolutely essential to understand it... We only need to read the last words remaining on the inscription," Mr Rondot, was quoted as saying by news agency AFP.

The dig, funded by the French foreign ministry, is also providing more information on the reign of a little-known king, Amanakhareqerem, mentioned in the inscriptions on the rams.

"Before we started the dig we only had four documents in his name. We don't even know where he was buried," he said.

"We are beginning to understand the importance of that king," he said, according to Reuters news agency.